Access was required for maintenance to the fire sprinkler systems and the emergency lighting. However due to recent upgrades which saw the glass roofed atriums replaced with a solid roof and false ceilings, the previous method of access was no longer possible.

The fragility of the the new internal ceilings meant that there could be no load applied to them and finding a system that was able to provide access had proved difficult for the client.

Pre-fab welded steel systems were not an option as the time delays that would have resulted from manufacture meant the project schedule would never have been adhered to. Adding to that, the transportation of such bulky components would have seen costs soar to an unacceptable level.

"We quickly concluded that a suspended walkway system was the only option that was possible." Murray Voss, Technical Manager stated. "This would allow safe access to the roof space without compromising the integrity of the newly installed ceilings."

The complex system was designed on the KOMBI Builda online program. Detailed drawings were produced with our technical department confirming that all the systems were correctly engineered to withstand the potential loads.

SAYFA's production team began immediate manufacture on the suspended walkway and what had seemed an impossible deadline soon saw the despatch of another KOMBI system. 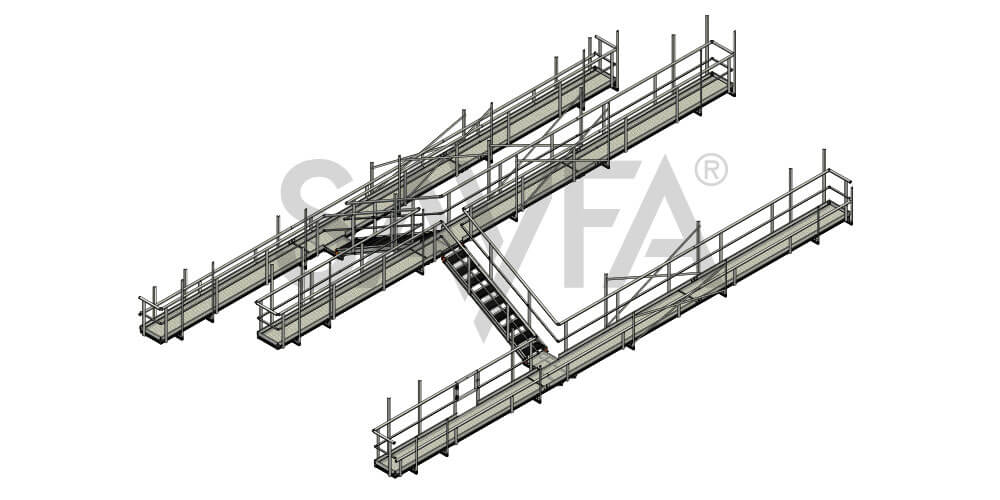 As the job was located in Western Australia there had been concerns that freight costs might blow out. Shipping these components as completed welded systems would have been a huge financial strain to the project, especially all the way across Australia.

However, due to KOMBI's modularity, components could be delivered flat packed and then constructed in situ using the patented KOMBI T-BOLT. This was a huge saving in both costs and time for the installer and the client, not to mention the reduced stress of knowing that if minor modifications were required they could be done on-site without specialist tools or welding. Fully engineered and manufactured in accordance with Australian Standards, KOMBI was able to offer the client a solution that perfectly fits into the roof space but enables workers access to safely and easily perform their maintenance tasks with no risk of damage to themselves or the structure.

How healthy are your working at height practices?