Applicants with vertigo need not apply ...

Stretching across the Shiniuzhai National Geological Park, the bridge's original construction design was to incorporate only a small portion of glass. However, the developers had other ideas, deciding to make the entire structure glass. The glass is 25 times stronger and 12 times thicker than the normal glass used in home windows and on a windy day the structure sways in the breeze. One of the workers involved in the build explains:

"The bridge we build will stand firm even if tourists are jumping on it. The steel frame used to support and encase the glass bridge is also very strong and densely built, so even if a glass is broken, travelers won't fall through."

Sound exciting? Just imagine being the workers who built it! 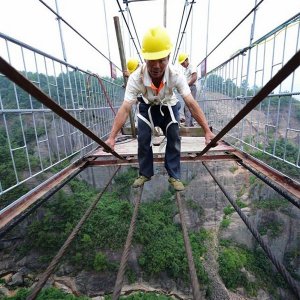 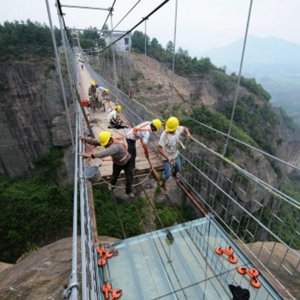 But hold the phone, this is old news now!

Opening in August 2016 this amazing feat of engineering is 430 metres (1,410 feet) long and 360 metres (1,180 feet) high. Interesting to note that due to the unprecedented amount of visitors that the bridge received on it's opening, it had to be closed after only just 13 days. It was estimated that 8,000 people per day would be attracted to the bridge but the amount of visitors grew to more than 80,000 per day causing operations to be suspended while authorities upgraded the attraction. It was reopened on September 30, 2016.

Among it's many other world records it also boasts the highest bungee jump at 265 metres (870 feet) and the longest swings in Asia.

Fancy a jump anyone?