The Sydney company that failed to conduct proper inspections on the window cleaning platform (BMU) involved in this incident has been fined $300,000 by SafeWork NSW. The investigation found that the company had failed to carry out basic inspection and maintenance on the platform and the incident has left the workers involved with "life changing" injuries.

It also found that the platform was due to have a major 10 year inspection which was not carried out. Judge Scotting stated, "The means of preventing the risk were simple and inexpensive. The offender could have refused to set up the BMU (platform) until it had been properly inspected."

More details of the investigation and incident can be view on the ABC news website.

Workers carrying out window cleaning on a building in Sydney's CBD had a close call when the cage that they were suspended in snapped a cable and dropped 12 storeys towards the ground. Only moments before the incident one of the men had shared photos on social media.

Bystanders, including a passing motorist, came to the aid of the men when the accident happened.

One man in his mid 20's sustained back and internal injuries when he was thrown from the cage, bounced off an an awning and was then left dangling by his harness. A witness reported that he ended up barely three metres off the ground and felt if he hadn't been wearing a harness he would most probably have died.

The other workman, who crashed onto the awning with the cage, received lower leg injuries and is in a serious but stable condition. 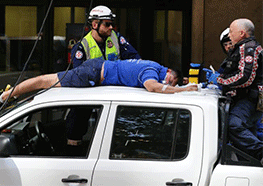 Emergency workers who attended the scene praised the actions of the bystanders who had assisted both the workers by using the available equipment to reach and tend to them until the professionals arrived at the area. One motorist even used the roof of his ute as an area to support and stabilise the dangling worker until the ambulance arrived. Additionally, they had made room at the scene so that emergency crews could easily carry out their work.

Is your roof access and fall protection equipment regularly inspected for wear and tear? Do a Height Safety Risk Calculator to evaluate your risk.

For more information on your obligations contact Sayfa on 1300 301 755 or [email protected].